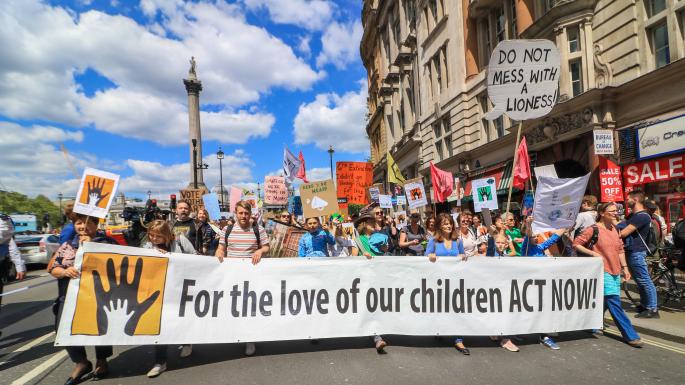 Hundreds of families were led on a march by a group of 11-year-olds yesterday to demand urgent action on climate change.

Representing the supposed 11-year window to act on the climate emergency, the 11 youngsters were accompanied by three giant prams containing globes, two painted like the Earth and another painted brown as if scorched.

The Mothers Rise Up march went from Hyde Park Corner to Parliament Square, with speakers including the television presenter Konnie Huq, the comedian Shappi Khorsandi and the activist Farhana Yamin. Similar marches took place across the country and in Cyprus, the Netherlands, Spain, the Czech Republic and Australia.

Elliott Powell, one of the youngsters leading the march, told the crowd he did not believe that he had a future.

Rosamund Kissi-Debrah, of Lewisham, south London, whose daughter Ella, nine, died of an asthma attack in 2013, told the crowds: “If you deal with air pollution it means you will also deal with climate change. Everyone here needs to be bothered about the impact of air pollution. My daughter died a very, very horrible death. If you live near a main road you should be angry.”

One thought on “Mothers Rise Up actions”