A UK aid package to tackle climate change across Africa has been announced by the International Development Secretary Rory Stewart during a two day visit to Kenya. 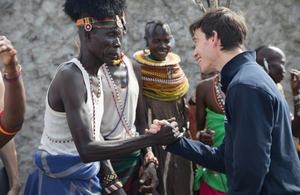 Increasing temperatures and extreme weather across the continent are having a profound impact on the lives and livelihoods of communities.

During his visit, the Secretary of State saw first-hand what happens when we do not protect the planet, including damaged natural flood defences; arid, drought-stricken land; and wildlife, the environment and jobs put at risk. He highlighted how tackling climate change is a global problem, and taking on an issue which affects us all will also ultimately benefit the UK.

Over the next five years, the new £250 million UK aid package would ensure UK expertise and experience can help developing countries become more climate resilient and move away from fossil fuels onto cleaner energy sources.

Working in partnership with African governments, organisations and communities, this funding would be the Department for International Development’s (DFID’s) largest single direct climate investment ever in the continent.

The Secretary of State said during his visit to a drought-affected village in Marsabit County in northern Kenya (July 12):

We are facing a global climate emergency. Polluted air, rising sea levels and increasing temperatures are felt by everyone in the world.

We must all play our part to protect the environment, wildlife, vulnerable families and communities – and this includes investing in renewable energy.

I am today announcing DFID’s biggest ever single direct aid investment in climate and the environment across Africa. This builds on my ambition to double DFID’s efforts on this issue globally. Tackling climate change is of direct benefit to everyone living on this planet, including of course in the UK.

African nations are responsible for just 2 to 3% of global emissions, but the continent is set to be the worst affected by the devastating impacts of climate change. Kenya is getting warmer and its rainfall becoming more uncertain.

In the coastal town of Lamu, in southern Kenya, the International Development Secretary heard on Thursday (July 11) about the importance of mangrove conservation. These trees act as a vital natural flood defence protecting communities from storms.

However, they are among the world’s most threatened vegetation and nearly 40% of Lamu’s mangroves have already been destroyed.

The International Development Secretary also visited the UNESCO World Heritage site Lamu Old Town where he heard how UK aid will support sustainable development of the town. While there he announced an additional £10 million towards DFID’s Sustainable Urban Economic Development programme to support urban economic growth in Kenya, which is resilient to climate-related shocks and disasters.

On Friday (July 12), the International Development Secretary met with communities in northern Kenya whose lives have been hit by drought. He announced an extra £4 million UK aid commitment to help prevent malnutrition and the threat of starvation for those living off arid lands in Kenya.

The effects of a changing climate and damage to the environment can already be seen in the village of Loiyangalani, near Marsabit County. In 2017 villagers experienced the worst drought for over five years, with people and livestock threatened by death, disease and starvation.

Wildlife and biodiversity is also under threat. Globally, one million animal and plant species are threatened with extinction. During a visit to Ol Pejeta conservancy in central Kenya, he saw the last two northern white rhino on the planet; a sub-species on the edge of extinction. The combination of cattle herders searching for food for their livestock and human conflict is having an impact on the habitats of rhinos – making them more vulnerable to extinction.

UK aid is helping to preserve the environment where wildlife like rhinos live. It does this in part, by helping cattle herders in Kenya fatten up their cows to earn more from their livestock while helping to manage the land where they graze, so they are not competing so intensely for grassland with such rhinos and other endangered species.

The UK is also working with African nations to deliver an ambitious move to efficient, low carbon technologies. An estimated 600 million Africans currently do not have access to electricity, but UK aid – through its development finance arm CDC and UK private sector investment is helping to support Kenya’s renewable energy sector, by funding the development of the largest onshore wind farm in sub-Saharan Africa at Lake Turkana.

The £250 million climate programme will work across Sub-Saharan Africa, in partnership with African governments and institutions, to increase resilience and support the transition of countries to low carbon economies. The funding will also help build technical expertise across a range of sectors to support the continent to deal with the devasting impacts of climate change and help it move to clean energy sources.

International Development Secretary, Rory Stewart, resigned his post in the cabinet on learning that Boris Johnson would become the new Prime Minister.

Britain allocated more overseas development cash to oil and gas in the two years after signing the 2015 Paris agreement than it had in the previous five, according to the study commissioned by the Catholic development agency Cafod and carried out by the Commons international development committee. Although the UK also increased support for renewables, Cafod said the continued support for carbon-intensive energy in middle-income countries was diverting resources that should be used to help poor communities gain access to electricity from wind and solar power.