In a report on the BBC website: https://www.bbc.co.uk/news/science-environment-44418849, international scientists have discovered that many of the oldest baobab trees on the African continent are dying.  Most of the oldest and largest African trees have died in the last 12 years. 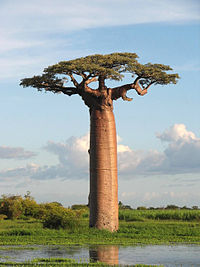 The trees have a characteristic shape, as they store water in their trunks.

Baobabs store water in the trunk (up to 120,000 litres or 32,000 US gallons) to endure harsh drought conditions.[12] All occur in seasonally arid areas, and are deciduous, shedding their leaves during the dry season. Across Africa, the oldest and largest baobabs began to die in the early 21st century, likely from a combination of drought and rising temperatures.[5] The trees appear to become parched, then become dehydrated and unable to support their massive trunks.[6]

Baobabs are important as nest sites for birds, in particular the mottled spinetail and four species of weaver.

It is suspected that the death of the trees is due to climate change.  The trees that have died or are dying are found in Zimbabwe, Namibia, South Africa, Botswana and Zambia. They are all between 1,000 and more than 2,500 years old.