The World Economic Forum has published on its websites those cities with the biggest carbon footprints.  The top twenty include:

The list was compiled by the Norwegian University of Science and Technology. Their study showed that 18% of all global emissions come from just 100 cities. Researcher Daniel Moran said he was surprised at how carbon footprints are concentrated into a small number of dense, high-income cities and affluent suburbs. And that might make curbing the absolute levels seem more achievable, with the power in the hands of a relatively small number of local mayors and governments.  Full details can be found on the World Economic Forum website:

Calculated on a per capita basis, Hong Kong was top of the list, followed by Mohammed Bin Zayed City and Abu Dhabi in the UAE. Calculated on this basis, four Chinese cities were in the top 10 per capita and two US cities –  New Orleans and Detroit.

Hong Kong – has the biggest carbon footprint per capita

Hong Kong has responded to the Paris Agreement  by setting out plans to lower their carbon emissions by 2030.

The Norwegian researchers said, “The confluence of high concentration of global GDP and global carbon footprints augurs well for future development of innovative strategies to reduce footprints. The fact that carbon footprints are highly concentrated in affluent cities means that targeted measures in a few places and by selected coalitions can have a large effect covering important consumption hotspots.”

In recent weeks there have been a number of TV programmes that demonstrate the dire circumstances in which various animal species live, which puts them at risk of extinction.  The two which have hit me hardest are two programmes, one about orangutans in Borneo and one about pangolins in Namibia (both shown on BBC2 in May 2018).

The plight of orangutans

Orphaned orangutans being transported in a wheelbarrow

The plight of orangutan has long been known and is mainly caused by loss of habitat.  Much of the forest where they live is being felled in order to cultivate trees producing palm oil.  Although much is being done to save them, it may all be too late.  There was much of this TV programme that I couldn’t watch, as it was all too sad.  A mother, clutching tightly to her baby at the top of a tree, was darted and then caught in a net as she fell, the baby quite conscious and alert still in her arms.  Another baby being kept in a tiny cage as a pet. It was heart-breaking. But there are caring centres where these orphaned babies are safely reared.

June 6th 2018: a short piece of video posted today, shows a male orangutan confronting a bulldozer which is about to destroy its habitat. The video is from International Animal Rescue.   See:

Rainforest Rescue has recently posted this photograph of a young orangutan who has been burnt in a fire to clear land for agriculture: 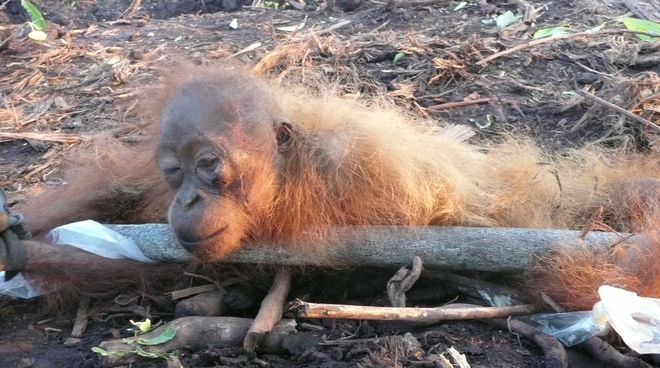 A new report from Indonesia has described how an adult orangutan was found blind and with 74 air gun pellets in his body. He is thought to have been shot by poachers. He was taken to a rehabilitation centre for an operation but the team was unable to save his sight, nor to remove all of the pellets from his body.

This insect-eating mammal may not be so well-known but it is among the ten animals that David Attenborough has said he would take on an ark in order to save them.  It is so endangered.

Photograph of pangolin (courtesy of Markinternational.info)

Being able to roll up into a ball when in danger is perhaps the characteristic that makes the pangolin so vulnerable, as it is easy to pick up.  It is therefore a favourite of poachers,  many thousands being trafficked to the Far East each year. Because it is so highly prized in China and Vietnam, the pangolin has become the most trafficked mammal in the world – up to 100,000 are thought to be poached each year in Africa and Asia to have their scales ground down into “curative” powder and their meat served up as a delicacy to the very wealthiest. It is the world’s most hunted animal.

The pangolin has an unusual gait, walking mainly on its hind legs due to the long claws on its front legs (used for digging out ants to eat).  Though very much smaller, when walking it is reminiscient of an earlier era of dinosaurs, like Tyrannosaurus Rex, which also walked on stronger back legs.  So, it must not be lost. 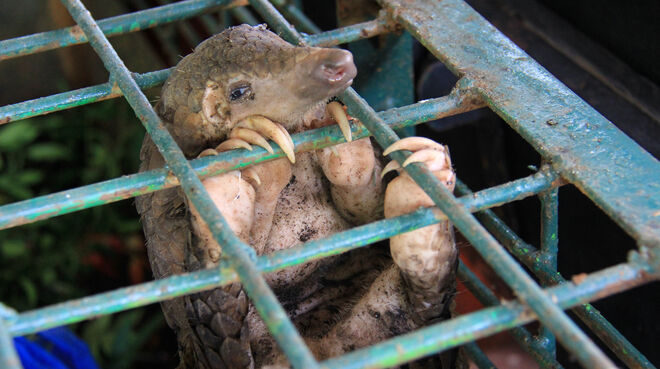 A caged pangolin in a Chinese wildlife market

So, whilst we worry about the fate of pandas, polar bears, big cats and other endangered species, and rightly so, let us not forget the disastrous future and present circumstances, that orangutans and pangolins are already facing.

But there is some positive news about the pangolin.  A Chinese NGO, dedicated to the shared vision of living in harmony with nature, CBCGDF, has been instrumental in campaigning on their behalf.  They were instrumental in getting 441 Kilos of pangolin scales (from 800-900 animals) being confiscated by customs officials and 12 suspects being detained.

A new report from China:

China has granted a reprieve to the world’s most trafficked nonhuman mammal—the pangolin. The country’s 2020 list of approved traditional medicines does not include pangolin scales, as it has for decades. The scales have long been sold in traditional pharmacies in China as an ingredient in legally allowed medications to treat everything from lactation problems to arthritis.

Asia and four in Africa—toward extinction. Tens of thousands of the animals, which resemble scaly anteaters, are killed annually for their meat—considered a luxury food in China and Vietnam—as well as their scales, curved disks of keratin, the same substance that’s in human fingernails.

“This is the single greatest measure that could be taken to save the pangolins,” says Peter Knights, CEO of the environmental nonprofit WildAid, an organization that focuses on reducing demand for wildlife products. “This sends a clear message that there are alternatives in traditional Chinese medicine and so you don’t need to use pangolins,” he says.

The revelation that scales are no longer an approved medicinal comes days after China announced that it was upgrading pangolins’ standing under the country’s wildlife protection law. Pangolins now are ranked Class 1—the status given to the nation’s beloved panda—which prohibits almost all domestic trade and use of the animals.

These TV programmes set me wondering about the cruelty and barbarity of the human species and what kind of mind-set leads people to exploit their environment and their fellow creatures in such devastating ways, all for personal benefit.  It is about greed and the acquisition of money, without doubt, but also about status and the maintenance of it.  Elsewhere on this website I have written about how the richest people in the world are mainly responsible for a situation in which the future of this planet is uncertain, all because they are promoting industries that burn fossil fuels, releasing carbon emissions, which act to warm the planet. And this is no different to the exploitation of, and cruelty to, endangered species.  Money, selfishness and greed is destroying our planet and its wonderful life forms.

Not all my readers will be Christians, as I am, so I have tried to keep this website secular.  However, what comes to mind when meditating about this situation is a passage in the Bible:

“We know that the whole of creation has been groaning as in the pains of childbirth, right up to the present time.”

In chapter 35 of my first book, “I Will Lift Up My Eyes” (2002), I discuss the human characteristic of acquisitiveness.  It was written whilst I was visiting Calcutta (Kolkata) in the 90s, when I was struck by the huge differences there between rich and poor – the vast contrast between the hedonistic affluence of the Grand Hotel and the pleading destitution of the beggars and lepers living on the streets outside.  Whilst I don’t think the poachers who prey on pangolins could be described as affluent, they are just trying to find their own way out of depriving circumstances, but there are many in the trafficking chain who have become affluent by it.  In the Hong Kong markets too, I had seen tiny monkeys, too young to be separated from their mothers, being kept in small cages to be sold for a profit.  Where is the compassion and conscience in all this?

Further thoughts on all of this can be found in the Introduction to “Three Generations Left?”

And today, I have been sent another posting from a colleague.  This is about UK mega-farms and how they are fattening up livestock for market, with little concern with the suffering that is caused by this.  Again it is all about profit.

With thanks to my colleague, Barbara, I copy the piece in its entirety below:

Drone footage and satellite images have recently revealed that thousands of British cattle reared for supermarket beef are being kept at some sites in outdoor pens, known as corrals, sometimes surrounded by walls, fences or straw bales. Although the cattle will have spent time grazing in fields prior to fattening, some will be confined in pens for around a quarter of their lives, until they are slaughtered. Disease spreads easily in such conditions and traces of the medication needed to prevent or treat the animals will be present in the meat offered for human consumption.

Who owns these companies? Who are the directors? Do they donate to party funds?

Why are there no official records held by DEFRA  on how many intensive beef units are in operation?

Government regulations  say that an environmental permit is needed if you operate any of the following:

Why is government not requiring an environmental permit before their construction – and indeed consulting those in their neighbourhood?

Though environment secretary Michael Gove said, in a parliamentary statement. “I do not want to see, and we will not have, US-style farming in this country”, it’s here.

The Guardian and Bureau last year revealed that 800 poultry and pig “mega farms” have appeared in the British countryside in recent years, some housing more than a million chickens or about 20,000 pigs.

Following the revelations, the environment secretary, Michael Gove, pledged that Brexit would not be allowed to result in the spread of US-style agribusiness.

Readers who want to know the extent of this problem and the location of megafarms for dairy, pigs and poultry, may find this information by looking at the interactive maps produced by  Compassion in World Farming: The snapshots show information about intensive pig rearing in Gloucestershire, where the writer lives.

A Moseley reader draws attention to research by the Guardian and the Bureau of Investigative Journalism establishing that the UK is now home to a number of industrial-scale fattening units with herds of up to 3,000 cattle at a time. Sites in Kent, Northamptonshire, Suffolk, Norfolk, Lincolnshire, Nottinghamshire and Derbyshire were identified, the largest farms fattening up to 6,000 cattle a year.

The practice of intensive beef farming in the UK has not previously been widely acknowledged – and these findings raise questions over the future of British farming.

Richard Young, Policy Director at the Sustainable Food Trust, said: “Keeping large numbers of cattle together in intensive conditions removes all justification for rearing them and for consumers to eat red meat…

“More than two-thirds of UK farmland is under grass for sound environmental reasons and the major justifications for keeping cattle and eating red meat are that they produce high quality protein and healthy fats from land that is not suitable for growing crops.”