This story by Debra Killalea, has been published in the New Zealand Herald on 27th November 2017.  See:

It relates to the legacy of nuclear tests carried out by the United States in the 1940s and 1950s.  Bikini Atoll, where 23 atomic bomb tests were carried out, is part of the Marshall Islands group. And another 40 tests were carried out at other islands in this group.  Mark Willacy, foreign correspondent, during a visit there, discovered that a giant concrete dome was built on Runit Atoll, in which tonnes of nuclear waste, including 400 lumps of plutonium, were disposed of.

Now rising sea levels and climate change threaten to unleash highly radioactive plutonium into the Pacific Ocean in a nightmare scenario for those who live in the Marshall Islands, where dozens of nuclear blasts took place, as well as further afield in the Pacific Ocean.  According to Willacy, rising sea levels have meant that water has begun to penetrate the dome, which contains the toxic waste, with radioactive material leaking out.

A 2013 report commissioned by the US Department of Energy confirmed that the dome was leaking. Whilst the US paid for the clean-up, Willacy said initial plans to line the bottom of the dome with concrete didn’t go ahead and the soil was permeable, which means that seawater gets inside.  He said,

“The dome was only meant to be a temporary solution until the US came up with a permanent plan. Instead it was a shoddy cost cutting exercise.”

He said cracks are visible in the dome’s surface but said, even if the structure failed, the US government didn’t necessarily believe it would lead to a change in the contamination levels in the waters surrounding it.  The concrete dome can be seen right beside a crater, presumably from a nuclear detonation, – and is best seen from aerial photographs.  It can also be seen from Google Earth images.

More than 50,000 people live in the Marshall Islands and climate change is happening for these people now.  Their views are very different to those of the complacent US authorities, who do not have to live there. Marshallese community leader Alson Kelen told Willacy the dome was the connection between the nuclear age and the climate change age.

“When the dome was constructed, the US DoD (Department of Defense) almost contemptuously reassured the RMI (Republic of Marshall Islands) government that it would last for the next 200,000 years. This is of course nonsense, and it’s now breaking apart.”

He said the Marshall Islands story is part of the wider one of nuclear testing in the pacific, carried out by the US, France, and the UK.

Further information about the nuclear tests carried out in the Marshall Islands can be found at: 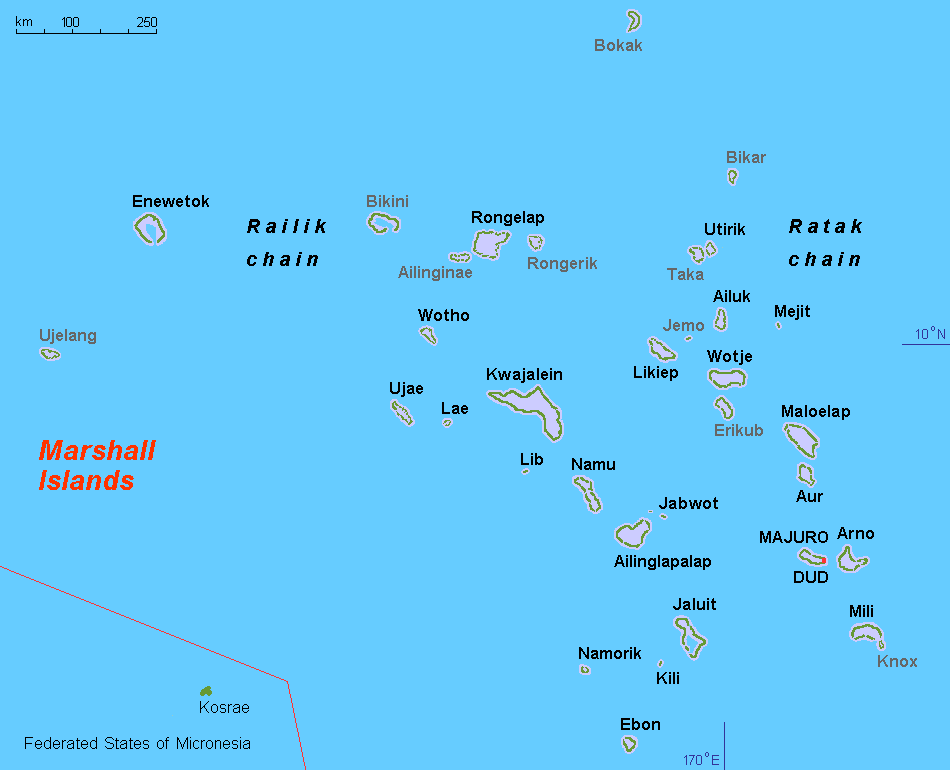 In a further report about the situation in the Marshall Islands, entitled “A tiny island used as a nuclear dumpsite is about to be submerged by water”, Joe McCarthy provides further information. See:

Some of his report is copied below:

The Enewetak Atoll is all but invisible on Google Maps. Halfway between Australia and Hawaii, the ribbon of land is home to a small indigenous population that has seen their way of life eroded by decisions far outside of their control.

For more than half a century, the atoll, which is part of the Marshall Islands, has been contaminated by nuclear explosions and waste, according to ABC Australia. The decades ahead could leave it submerged by rising sea levels.

In this way, Enewetak “is at the intersection of two of the biggest problems of the last century and this century, nuclear weapons and sea level rise,” Michael Gerrard, the chair of Columbia University’s Earth Institute in New York who has studied the atoll, told Global Citizen.

Both of these problems are at risk of converging, ABC Australia reports, because the main holding container for the atoll’s nuclear waste is being compromised by rising waters.

The atoll’s problems began in the 1940s and 1950s when the US began using it for nuclear bomb tests. The people of Enewetak were evacuated and 67 nuclear bombs were dropped, devastating wildlife, spreading nuclear toxins far and wide, and creating massive craters.

One of those craters was on Runit Island. In the late 1970s, the US began to partially clean the nuclear waste from the island. Some of the radioactive chemicals had relatively short half-lives, Michael Gerrard wrote in an op-ed, and were left to naturally decay despite their risks. Another toxin, plutonium-239, has a half-life of 24,000 years and had to be dealt with.

The 100-meter wide crater on Runit Island was deemed a good place to dump as much soil contaminated with plutonium as possible. Chunks of unexploded plutonium-239 were also disposed of in the hole.

When the cleanup was finished — far below standards that would be deemed sufficient in the US, according to Gerrard — a massive concrete shell was built to cover the hole.

No reinforcements were made to the bottom and sides of the hole, meaning the waste directly interacts with the soil and a dumpsite for radioactive waste fails to meet standards for normal trash landfills, Gerrard said.

The displaced people of Enewetak Atoll were finally allowed to return in 1980, despite the widespread contamination of their home. Traditional forms of fishing, farming, and gathering had to be abandoned because the wildlife became too contaminated, ABC Australia reports.

And despite the ongoing threat posed by the non-reinforced radioactive dumpsite, no adjustments have been made to it, ABC notes. That’s because the radiation outside the dome exceeds the radiation inside of it, according to the US Department of Energy report, so the release of the waste wouldn’t make a major environmental difference.

Rising sea levels have compromised the dome in the years since its construction, a problem that has only grown worse in recent years, and a powerful typhoon could destroy it, according to the report.

The Marshall Islands are around six feet above sea level, and large parts of Enewetak are at risk of being submerged in the years ahead. Current flooding rates are already making the islands uninhabitable once again, according to ABC Australia.

“It’s important to recognize that the Marshall Islands are doubly screwed,” Gerrard said. “They were the site of nuclear explosions by the US, and one of the things that they left behind was this nuclear dome and the other thing is the country is going underwater because of greenhouse gas emissions for which the US is major contributor.”

Between 1946 and 1958, the US tested 66 nuclear weapons near Bikini atoll. Populations living nearby in the Marshall Islands were exposed to measurable levels of radioactive fallout from these tests.

Another report received in January 2019

The Enewetak Atoll, in the Marshall Islands, is about halfway between Australia and Hawaii. After WWII, the atoll came under control of the US, and in 1948 the first nuclear test was carried out. For 10 years, as part of the Cold War, 43 nuclear bombs were detonated on Enewetak – twice as many tests as its neighbour, Bikini Atoll.

The US sent around 4000 personnel to the area in 1977 to clean the site. During the three-year process, they mixed contaminated soil and debris with cement and buried it in one of the blast craters on the beach. The concrete dome was added and in 1980 the atoll was said to be safe for habitation. Local residents returned the same year. But the effect of rising sea levels due to climate change had not been anticipated.

In 2013, Lawrence Livermore Laboratories issued a disturbing report commissioned by the US Department of Energy which examined the ‘Cactus’ dome on Runit Island, one of 40 islands of the Enewetak Atoll, recorded the cracks and ordered repairs.

It noted (p2) that “If the Cactus crater concrete containment structure on Runit Island were located in the United States proper (or subjected to U.S. regulatory authority), it would be formally classified as a Low-Level Radioactive Waste Disposal Site and be subject to stringent site management and monitoring practices”.

A reader sent a link to an article by Australian journalist Phoebe Loomes, who reports that rising sea levels have added to the degradation of the large, concrete-dome holding the toxic materials which are leaking into the Pacific Ocean.

Mike Willacy, an investigative journalist, travelled to the Marshall Islands for the ABC’s Foreign Correspondent program in 2017. He said that the dome was only meant to be a temporary solution until the US came up with a permanent plan – a cost-cutting exercise.

He saw the cracks in the concrete dome and was told that residents feared for their lives if the structure collapsed. They warned of the fallout that could arise from the water flowing into the Pacific Ocean.

“Seawater is penetrating the underside of the dome, because when they threw all this material into the old bomb crater, they didn’t line it with anything. They were supposed to line it with concrete, but that never happened because of cost considerations. So, as the sea level has risen, the groundwater level has risen and therefore you have groundwater penetrating inside the dome, because a lot of this atoll is obviously sand (and) coral. It’s permeable material.”

In the Marshall Islands, the most common cause of death is diabetes, which is related to a thyroid disorder – the second is cancer. There are high levels of birth defects, cancer and thyroid problems, which locals attribute to continued fallout from the radioactive bombing of the area.  Studies have shown that there is a higher level of cancer in residents of the Marshall Islands, who were alive during the years of the US nuclear tests, especially amongst those people living in the northern islands (closer to the test sites), when compared with those living further south:

The population of the Marshall Islands is around 70,000 and local people are allowed to live and work in the US without a visa as part of the reparations for the nuclear testing that took place. Over a third have already moved to the US. Ms Loomes adds, “It is said that when you leave the Marshall Islands, you buy a one-way ticket”.

As sea levels continue to rise and the climate becomes more unstable, residents of the Marshall Islands are faced with the harsh reality that their island homes are becoming uninhabitable. Willacy writes: “The children who live there refer to themselves as ‘the last generation’ “.