This post is copied from the website of the United Nations Framework Convention on Climate Change (UNFCCC) and is encouraging news, though do note the sentences below in bold, which sound a note of caution.  Please note also that several significant countries did not sign up to the Kyoto Protocol and these are some of the worst polluters (eg USA; Canada; Russia; Japan).

The report from the UNFCCC (released June 2020):

The Protocol’s second phase, called the second commitment period, was established by means of the Doha Amendment in 2012 and runs from 2013 – 2020. The Amendment strengthened quantified emission limitation or reduction commitments for developed countries and set a goal of reducing GHG emissions by 18% compared to 1990 levels.

The assessment of the latest information received from Parties with commitments under the Doha Amendment (Annex B Parties), based on data for the period 1990-2018, shows that total aggregate GHG emissions in 2018 were 25.3% lower than in 1990.

Moreover, if current annual average emissions of Annex B Parties (amounting to 5,696 Mt CO2eqin the period 2013–2018) remain at this level for 2019 and 2020, the emission reduction target of 18% could be further exceeded. 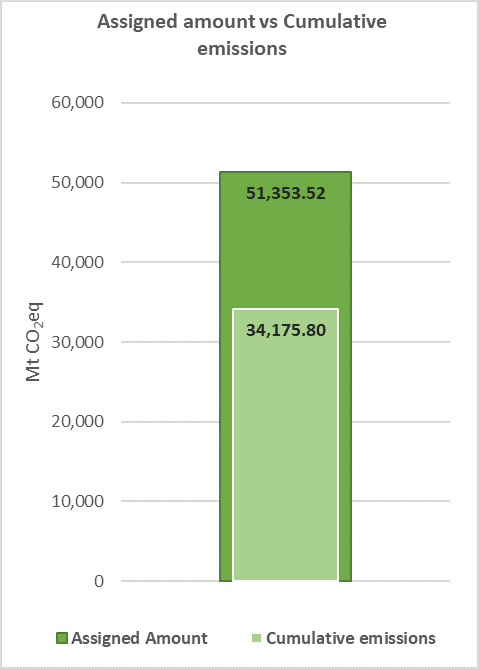 “While the results of this assessment are very encouraging, they only apply to a group of some 37 countries that agreed to emission reduction targets under the Doha Amendment,” said Ms. Patricia Espinosa, Executive Secretary of UN Climate Change. “Globally however, emissions have been rising, which clarifies the urgent need for greater ambition,” she added.

This year is critical with respect to climate change ambition as 2020 is the year in which Parties will submit their new or updated Nationally Determined Contributions (NDCs).

NDCs are at the heart of the Paris Climate Change Agreement and embody efforts by each country to reduce national emissions and adapt to the impacts of climate change. Each NDC reflects the country’s ambition, taking into account its domestic circumstances and capabilities.

“The submission of new or updated NDCs represents an important opportunity for all countries to raise their ambition and to put the entire world onto a reduced emissions pathway,” said Ms. Espinosa.

“The current global emissions pathway would likely result in an increase of global average temperatures of 3C or more,” she explained. “This would be significantly higher than the temperature limits of less than 2C and as close to 1.5C as possible as contained in the Paris Agreement – hence the urgent need for greater ambition.”

The assessment under the Doha Amendment revealed that the GHG reductions have generally been achieved through national mitigation actions.

“This shows the potential of consistently implementing climate change policies and actions at the national level. Through the NDC process, countries have the opportunity to further advance climate policies and actions, and to ratchet them up over time” Ms. Espinosa underlined.

The new figures present themselves without the Doha Amendment to the Kyoto Protocol having officially entered into force and the commitments thus having become legally binding. To date, 138 of the needed 144 instruments of acceptance to enter the amendment into force have been received.

Ms. Espinosa said: “The United Nations is actively engaging with countries to encourage governments to ratify the Doha Amendment as soon as possible. The amendment’s entry into force would be a valuable signal of a unified, multilateral commitment to the fight against climate change”.

The Kyoto Protocol, which took effect in 2005, sets binding emission reduction targets for developed countries. Its first commitment period ran from 2008-2012 and set an average reduction target of 5% compared to 1990 levels.

During this time, the emissions of the 37 developed countries that had reduction targets declined by more than 22% compared to 1990, far exceeding the initial target of 5% compared to 1990.

The Protocol thus clearly plays a key part in reaching the objective of the UN Climate Change Convention, namely to stabilize greenhouse gas concentrations and reduce the consequences of climate change.