An article published in The Guardian two years ago by Bill McGuire discusses this and concludes that individual catastrophic events are unlikely to be triggered by climate change.  However, there does appear to be a cumulative effect, with extreme events being more powerful rather than more common.  In 2016, there was considerable difference of opinion between climatologists.  See:

“The atmosphere is far from isolated and interacts with other elements of the so-called “Earth system”, such as the oceans, ice caps and even the ground beneath our feet, in complex and often unexpected ways capable of making our world more dangerous. We are pretty familiar with the idea that the oceans swell as a consequence of the plunging atmospheric pressure at the heart of powerful storms, building surges driven onshore by high winds that can be massively destructive. Similarly, it does not stretch the imagination to appreciate that a warmer atmosphere promotes greater melting of the polar ice caps, thereby raising sea levels and increasing the risk of coastal flooding. But, more extraordinarily, the thin layer of gases that hosts the weather and fosters global warming really does interact with the solid Earth – the so-called geosphere — in such a way as to make climate change an even bigger threat.

This relationship is marvellously illustrated by a piece of research published in the journal Nature in 2009 by Chi-Ching Liu of the Institute of Earth Sciences at Taipei’s Academia Sinica. In the paper, Liu and his colleagues provided convincing evidence for a link between typhoons barrelling across Taiwan and the timing of small earthquakes beneath the island. Their take on the connection is that the reduced atmospheric pressure that characterises these powerful Pacific equivalents of hurricanes is sufficient to allow earthquake faults deep within the crust to move more easily and release accumulated strain. This may sound far fetched, but an earthquake fault that is primed and ready to go is like a coiled spring, and as geophysicist John McCloskey of the University of Ulster is fond of pointing out, all that is needed to set it off is – quite literally – “the pressure of a handshake”.

Perhaps even more astonishingly, Liu and his team proposed that storms might act as safety valves, repeatedly short-circuiting the buildup of dangerous levels of strain that otherwise could eventually instigate large, destructive earthquakes. This might explain, the researchers say, why the contact between the Eurasian and Philippine Sea tectonic plates, in the vicinity of Taiwan, has far less in the way of major quakes than further north where the plate boundary swings past Japan.

In a similar vein, it seems that the huge volume of rain dumped by tropical cyclones, leading to severe flooding, may also be linked to earthquakes. The University of Miami’s Shimon Wdowinski has noticed that in some parts of the tropics – Taiwan included – large earthquakes have a tendency to follow exceptionally wet hurricanes or typhoons, most notably the devastating quake that took up to 220,000 lives in Haiti in 2010. It is possible that floodwaters are lubricating fault planes, but Wdowinski has another explanation. He thinks that the erosion of landslides caused by the torrential rains acts to reduce the weight on any fault below, allowing it to move more easily.

It has been known for some time that rainfall also influences the pattern of earthquake activity in the Himalayas, where the 2015 Nepal earthquake took close to 9,000 lives, and where the threat of future devastating quakes is very high. During the summer monsoon season, prodigious quantities of rain soak into the lowlands of the Indo-Gangetic plain, immediately to the south of the mountain range, which then slowly drains away over the next few months. This annual rainwater loading and unloading of the crust is mirrored by the level of earthquake activity, which is significantly lower during the summer months than during the winter.

And it isn’t only earthquake faults that today’s storms and torrential rains are capable of shaking up. Volcanoes seem to be susceptible too. On the Caribbean island of Montserrat, heavy rains have been implicated in triggering eruptions of the active lava dome that dominates the Soufrière Hills volcano. Stranger still, Alaska’s Pavlof volcano appears to respond not to wind or rain, but to tiny seasonal changes in sea level. The volcano seems to prefer to erupt in the late autumn and winter, when weather patterns are such that water levels adjacent to this coastal volcano climb by a few tens of centimetres. This is enough to bend the crust beneath the volcano, allowing magma to be squeezed out, according to geophysicist Steve McNutt of the University of South Florida, “like toothpaste out of a tube”.

If today’s weather can bring forth earthquakes and magma from the Earth’s crust, it doesn’t take much to imagine how the solid Earth is likely to respond to the large-scale environmental adjustments that accompany rapid climate change. In fact, we don’t have to imagine at all. The last time our world experienced serious warming was at the end of the last ice age when, between about 20,000 and 10,000 years ago, temperatures rose by six degrees centigrade, melting the great continental ice sheets and pushing up sea levels by more than 120m.

These huge changes triggered geological mayhem. As the kilometres-thick Scandinavian ice sheet vanished, the faults beneath released the accumulated strain of tens of millennia, spawning massive magnitude eight earthquakes. Quakes of this scale are taken for granted today around the Pacific Ocean’s “Ring of Fire”, but they are completely out of place in Santa’s Lapland. Across the Norwegian Sea, in Iceland, the volcanoes long buried beneath a kilometre of ice were also rejuvenated as the suffocating ice load melted away, prompting a “volcano storm” about 12,000 years ago that saw the level of activity increase by up to 50 times.

Now, global average temperatures are shooting up again and are already more than one degree centigrade higher than during preindustrial times. It should come as no surprise that the solid Earth is starting to respond once more. In southern Alaska, which has in places lost a vertical kilometre of ice cover, the reduced load on the crust is already increasing the level of seismic activity. In high mountain ranges across the world from the Caucasus in the north to New Zealand’s southern Alps, longer and more intense heatwaves are melting the ice and thawing the permafrost that keeps mountain faces intact, leading to a rise in major landslides.”

McGuire goes on to discuss individual events, such as volcanic eruptions in Iceland, landslides in the Alps, melting of ice in Greenland and other mountainous areas, as well as the melting of the permafrost in Siberia.

Bill McGuire is professor emeritus in geophysical and climate hazards at UCL. His current book is Waking the Giant: How a Changing Climate TriggersEarthquakes, Tsunamis and Volcanoes.

The subject has also been discussed more recently by Josh Babbatiss in The Independent:
https://www.independent.co.uk/environment/volcano-eruption-climate-change-mountain-landslide-glacier-global-warming-a8299821.html

Oliver Ralph, insurance correspondent for the Financial Times reported on this on 20th December 2017.  His main source of information was Swiss Re, a leading wholesale provider of reinsurance, insurance and other insurance-based forms of risk transfer. See: www.swissre.com.

According to Ralph’s figures, natural and man made disasters caused $136 billion of insured losses in 2017, more than double the 2016 figure and well above the 19-year average of $58 billion.

Most of the losses have been as a result of hurricanes, wildfires and earthquakes in the Caribbean, southern US and Mexico. 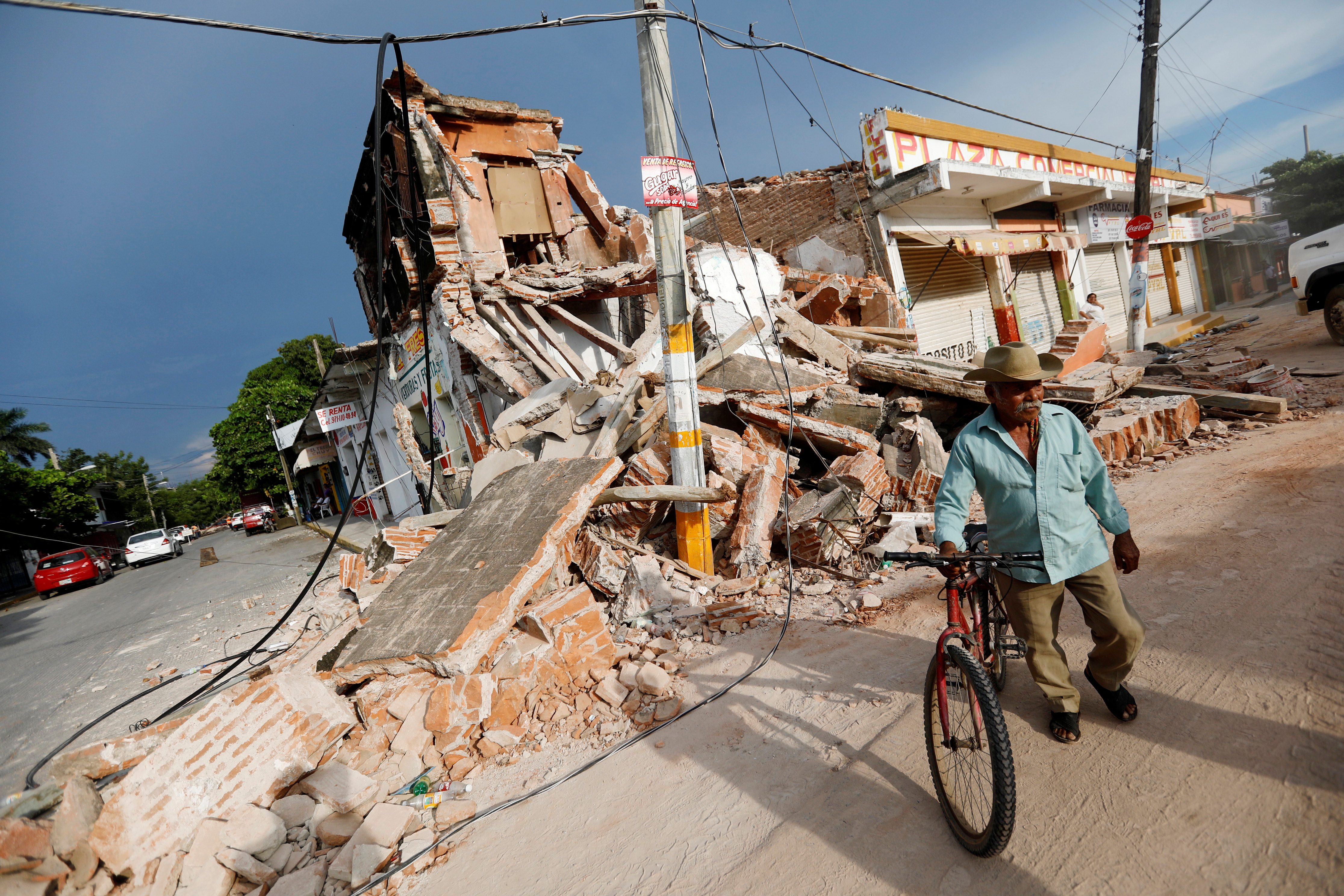 Image from the Mexico earthquake in 2017

Lloyd’s of London will look to cut costs after a year of expensive natural catastrophes plunged the insurance market into a £2 billion loss, its first in six years.

Lloyd’s reported a pre-tax loss of £2 billion for the year to December 31 (2017), compared with a profit of £2.1 billion in 2016, after it paid out £4.5 billion in compensation to victims of a spate of natural disasters.

During one of the most expensive hurricance seasons on record last year, Hurricane Harvey ripped into Texas in late August, followed swiftly by Irma, which hit the Florida peninsula, and then Maria, which left devastation in its wake in Puerto Rico. There were also devastating wildfires in California, an earthquake in Mexico, monsoon flooding in Bangladesh and a mudslide in Colombia. 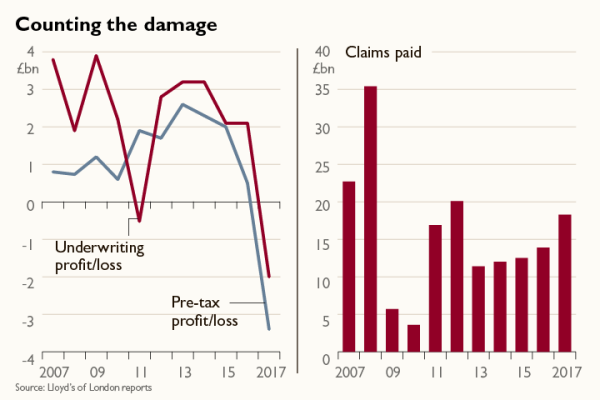 Lloyd’s of London is the world’s oldest insurance market, whose history dates back to coffee houses in the City in 1688. It is based in the renowned Lloyd’s building in the heart of the City. It acts as the umbrella organisation for the insurers and brokers who provide commercial cover in areas ranging from shipping and airlines to oil rigs and trains, often choosing to pool the risks they take on by forming syndicates of underwriters.

During the course of its existence, it has survived several near-death experiences, including the impact of a wave of asbestos-related claims during the 1990s and the seizure of the airline market after the 9/11 terrorist attacks of 2001. It also fought, and won, a damaging battle with wealthy insurance investors, known as Names, who claimed they were misled over risky deals they bought into in the early 1990s.

As well as the London market, Lloyd’s operates in overseas markets from the US and China to emerging markets such as Africa. It has also got involved in new areas of insurance, including providing cover against cyberattacks.

The world’s insurers are estimated to face a collective bill for last year’s disasters of about $140 billion, according to experts at JLT Re, a unit of Jardine Lloyd Thompson. Lloyd’s paid out £18.3 billion in claims last year, including £4.5 billion in connection with natural disasters, more than double the previous year. The catastrophe-related losses wiped out the effect of a 12.4 per cent increase in gross written premiums to £33.6 billion during the year and a 38 per cent jump in the return that Lloyd’s generated from investing the premiums received, from £1.3 billion to £1.8 billion.

Inga Beale, who took charge of the Lloyd’s market four years ago, described 2017 as an “exceptionally difficult year” for the insurance market and the organisation wil now focus on a cost-cutting and efficiency drive. All of Lloyd’s members had been ordered to process 30 per cent of their insurance quotes and risk-related documentation electronically by the end of September to bring down their expenses.