The industrial revolution (IR) continuum of development, which has continued unrelentingly since it began, demonstrates the huge human potential to invent, explore, manufacture, develop, innovate and improve – something that we can be proud of as the species which has come to dominate this planet. Human achievements are extraordinary and the potential to continue in a similar vein is tempting and attractive, each generation wanting to better the one before and each nation wanting to do better than its rivals. But somehow, we need to differentiate between natural pride in our achievements, curiosity, the desire to invent more and more complex gadgets and the need for responsibility.  Otherwise human inventiveness becomes a continuum of its own and a weapon of our own destruction.

One of the best examples of this is, perhaps, the situation we find ourselves in, as a result of space travel and satellite technology.  The picture below, recently featured in a BBC Horizon programme, in which we were informed that there are 22,000 large objects circulating the planet, each travelling (hurtling) at 17,000 mph.  The result of collisions could be catastrophic, yet there is currently no law governing space operations. At the moment about 120 new satellites are launched every year and are used for all kinds of purposes, from GPS systems to TV programmes linking events happening across the world and drone warfare. Some of them are just debris remaining from previous space missions. Only recently part of an American space rocket washed up in the Isles of Scilly. 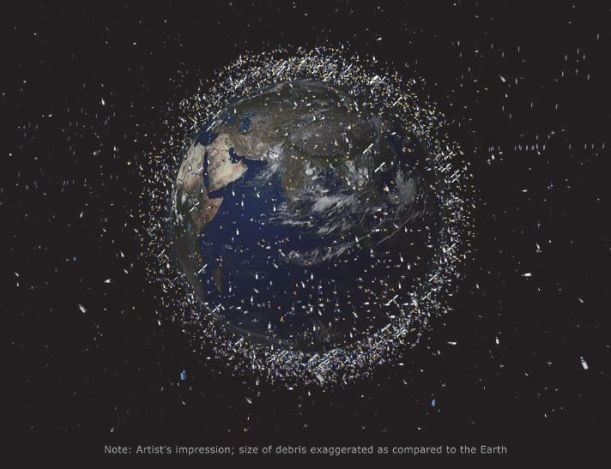 The idea of launching rockets, space stations and satellites into space is exciting for us as a species but, over the last 40-50 years, it has been carried out with no forethought, no cohesion, inadequate co-operation between nations and with no real plan to mop up the debris it has created. In fact, in the early days, it was carried out in competition between nations, America and the Soviet Union each wanting to be the first to put a man into space or on the moon.  This is only one issue where there is a need for more, and better, co-operation between nations.  In a way, the image is a dramatic reminder of how man, left to his own devices, has messed with the planet almost irrevocably.

Fig 30: The launch of a space rocket (from http://www.google.com)

The Concept of Progress

Everything that has happened since the beginning of the industrial revolution has been seen as progress. But is this so-called progress really progress at all or is it a hedonistic route leading to the destruction of the planet? This is assuming that we do not destroy each other in a fight for supremacy in the process.  One of the voices raised against those who warn that we need to live more simply, is that we cannot ignore progress and return to the times before the industrial revolution, which were not as comfortable as the times we live in today. It is seen as a backward step. And I am definitely not advocating that we return to the way things were before the industrial revolution.

So, let’s have a look at this idea of progress and what it really means. Perhaps it means different things to different people. Perhaps it is being used to justify practices that are dangerous to the planet and to our future existence, for many have benefited financially from the relentless IR Continuum.

The word “progress” itself gives a feeling of dynamism and of continuous advances and improvements.  But, if these advances are not beneficial to the global population as a whole, and its many species, then they cannot be described as progress at all but are more accurately described as “destructiveness” or “dissolution”. I would therefore like to re-define the word “progress” to: making advances that benefit society and the global population”.  With this new definition, we could still include advances in technology, such as the development of forms of renewable energy and some medical advances, as progress. But everything else should not be deemed as progress at all.

Along with “progress” another word that is attractive to us as a species is the concept of “freedom” or “free-will”. Individuals like to be able to have a choice about what they do and to have the freedom to engage in whatever it is that fascinates them, whether it be space technology, weaponry, driving fast cars, inventing new machines or just taking a holiday abroad. But freedom has to be accompanied by responsibility, or it just becomes selfishness.  Any suggestion that we should curb our lifestyles is opposed rigorously. Yet unpopular legislation that has happened in the past (like seat-belt legislation, MOT testing of vehicles and the rationing of food after the Second World War) has eventually led to greater safety and more responsible behaviour. In an effort to reduce the number of plastic carrier bags littering the world, some supermarkets have recently started to charge for these. A good idea but I have been gobsmacked at the negative response to this in some quarters.

I believe that there are two dynamics in operation here.  On the one hand there is the wondrous beauty of the world that we live in, a world where everything fits harmoniously together in the cycles, webs and relationships described in chapter 1. And, on the other hand, there are the mind-boggling achievements of the human race, developed through our special intelligence, which sets us apart from other species.  The two dynamics are juxtaposed but, as yet, not in harmony.  Can we, as intelligent human beings, find a way forward in which our inventiveness and inquisitiveness and (yes) greed, does not destroy the beautiful world in which we live, before we end up destroying ourselves and the habitats we, and the creatures we share this planet with, live in?

The two opposing dynamics in juxtaposition 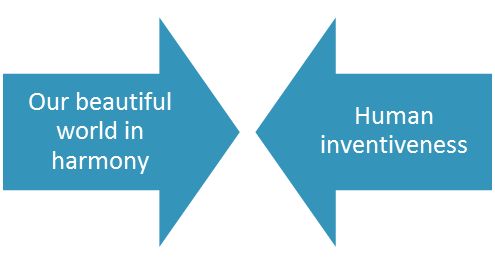 Britain’s role in saving the Planet

Furthermore, since Britain was the country to introduce industrialisation to the world, I believe it should also play a major leadership role in finding ways to reduce the damaging effects of carbon emissions and other pollutants (methane, chlorofluorocarbons, nitrous oxide, black carbon particulates, nuclear materials) produced by industrial economies.  And, in a similar vein, perhaps the responsibility of clearing up space junk should rest with the space-pioneering countries, America, China and Russia and, to a lesser extent, Europe.

During the 1940s-50s, one of the problems faced by Britain was smog – a thick, dense fog that descended on our cities, making breathing difficult and reducing the ability to see where you were going. A powerful memory from my childhood was a time when smog had descended so thickly that we could not find our way home; my sister and I therefore decided (perhaps unwisely) to take a bus; the bus did eventually arrive but the smog was so thick that the driver could not see the kerb and the bus conductor had to walk alongside the bus with a torch, to help the driver to see the way ahead. It took us hours to get home and, in those days, there were no mobile phones to reassure parents that we were OK.

Smog was caused by factory pollutants, such as sulphur dioxide, and government legislation was brought in to limit the emission of such chemicals and, as a result, smog has not been the same problem that it was during my childhood. That particular era demonstrates that it is possible to reduce the harmful effects of industrialisation. However, we still see a haze of pollutants in the skies over many of the major cities of the world.  It was observing the cloud of haze over many of the cities of the world during my 1994 world trip that made me realise that one day I would have to raise awareness about it.  It has taken me 22 years to take such action but I do hope that the action required to save the planet does not take another 22 years.

Fig.32: People in China wearing masks due to the urban pollution there

Interestingly, I am not the only person to use the smog era as an example of what can be done if the motivation is there, through the British legislation at that time to prevent further smog. Prof. Paul Rogers, in his ORG Special briefing to the Oxford Research Group30 and his lecture at the Imperial War Museum (2012) has also cited it, together with three other examples of actions that can be introduced to alleviate the worst effects of human activity. The following are four of his examples:

The move of populations throughout the world to cities has also led to urban sprawl and cities becoming more and more industrialised.  Pollution of the atmosphere around cities is very evident.  A recent article in the Financial Times31, reporting on studies at Kings College London, claimed that up to 9,400 Londoners per year die prematurely because of breathing in pollutants commonly found in fumes from diesel trucks, buses and cars. Thus Londoners are more likely to be killed by the air they breathe than in a car accident.  During 2010, more than 3,000 people were admitted to hospital with breathing and heart problems related to air pollution.

So, in summary then, human inventiveness, whilst being a remarkable feature of the human species, can also have its downside.  Not all inventiveness should be seen as progress. We need to develop as a species a new quality – that of being able to assess what destruction unregulated-inventiveness might bring and acting responsibly as a result.  We do still have a beautiful world, even though it is in danger.  Can I add another dynamic to the picture. Is this achievable?

Fig.33: The three dynamics in balance

The first part of this chapter was written almost four years ago and, since then, awareness of the issues relating to destruction of our planet has become much greater.  This may be related to the issuing of an IPPC (UN) publication in October 2018, stating that climate change is happening much more quickly than we anticipated and that the Paris-agreement-target of keeping below 2ºC  of global warming needs to come down to 1.5ºC. This report seems to have triggered much action across the world.  Children are particularly concerned, as it is their future that is at risk. It has also led to scientists sending an open letter to The Guardian, stating the urgency of the problem.  I was privileged to sign this myself and it can be found in one of the blogs above.

The other thing that has happened is the development of campaigning groups across the world.  In the UK, this was Extinction Rebellion, which held major demonstrations last month in the capital, leading to the blocking of most of the streets.  Interestingly, during this period, pollution levels in London, dropped down into the normal zone.

But, there is still a resistance in many circles to stop the addiction to consumerism, which has been one of the things associated with the IR continuum.  Some people think, and promote the idea that, the human race can deal with this threat through some technological device or other.  They think that human ingenuity, which got us into this situation in the first place, can help get us out of it. Rather than changing our lifestyles, they want us to invent some process of capturing carbon emissions.  Others think that we need both: developing renewable energy, as well as carbon capture.

Yet others think it is too late anyway and that we face disruptive and uncontrollable levels of climate change in our lifetimes, bringing starvation, destruction,
migration, disease and war. I will discuss this issue further in another post.

Only the future will show whether human ingenuity can get us out of this dilemma….