A recent report in the Financial Times draws attention to the consequences of three years’ of drought on the economies of these two European countries.

A dried-up river bed in Germany

Parts of continental Europe have been struck by drought for the third year in a row, with desiccated pastures in France’s Loire valley, campsites near Marseille destroyed by a forest fire, hosepipe bans in western Germany and fish farms in Saxony running short of fresh water.

This year’s July was the driest in France since 1959 according to the national weather office, with less than a third of normal rainfall, while the average temperature between January and July was the highest since its records began.

Germany had one of its driest spring seasons in more than a century this year, and rainfall in July was nearly 40 per cent below normal.  There are fears that there will be a repeat of the low water levels on Germany’s major rivers, such as the Rhine, that happened two years ago, disrupting shipping and hitting the country’s economy.

“The heat has been roasting everything,” said Clément Traineau, a cattle farmer near Angers on the Loire. “We had not a drop of water in July.”

A report in Nature demonstrated that the drought over the two previous consecutive summers (2018-19) was unprecedented in the last 250 years.  The long dry summer of 2003 had been devastating for crops but their predictions suggested that drought, caused by climate change, is more likely to feature in the future.

Their data also suggested that there has been an increase in the area affected by drought in recent years (see figures below). 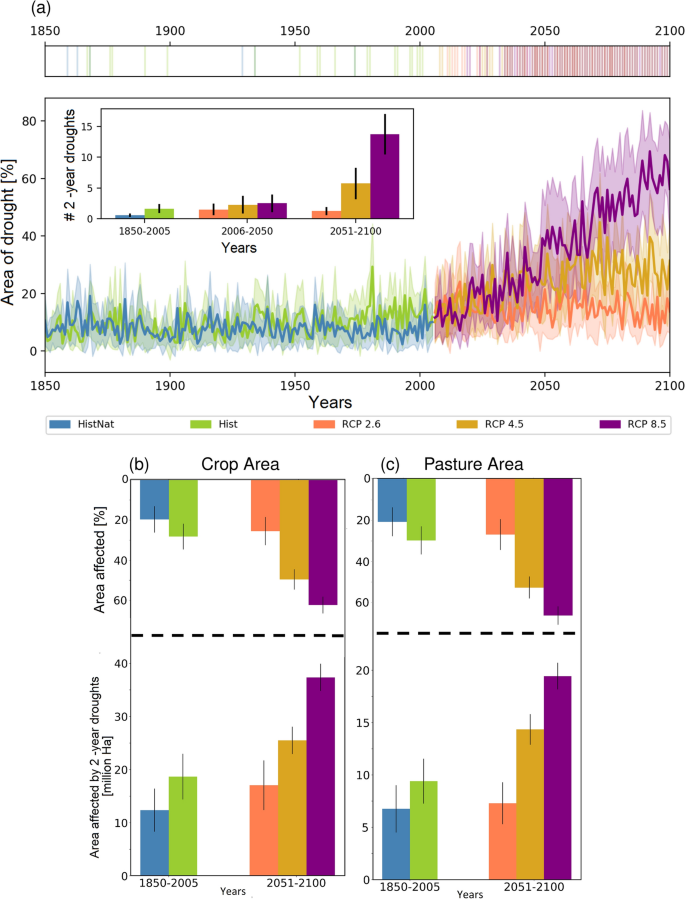 A report in the Financial Times includes stories from French farmers in the Loire valley who are being put out of business by climate change.  This summer’s heatwave has been devastating to them.

One of the farmers, Clément Traineau, described the stunted growth of corn, due to the drought, which means that his harvest will be only half of what it should be, so that there will not be enough to feed his cattle during the winter. Beef prices have also been stagnant due to a number of factors, not the least of which is the latest IPCC report calling on people to eat less meat.  One farmer has been forced to sell a quarter of his cows to make ends meet.

Intense storms on August 6th brought some relief to the drought but they also caused flooding and mudslides.

Farmers in the Loire valley are now trying to diversify their income, investing in wind farms and solar panels (on top of the cow sheds).  They are also generating power by burning methane from cow dung.

M. Traineau is quoted as saying:
“We farmers are in the front line of climate change as victims, and — in the media — as the guilty ones for producing meat. But people forget we can also be a means of fighting global warming. Meadows and pastures have a substantial capacity for storing carbon.”

The leaders of Canada and France, PM Trudeau and President Macron, are joining forces to combat climate change together.  They met in Paris last week and agreed to work more closely on tackling targets laid out by the Paris Agreement. This partnership on climate and the environment will include pushing measures like securing global carbon pricing, encouraging energy efficiency and reducing emissions in transport sectors.

Canada is hosting the G7 summit in Charlevoix, Quebec, this June, and will hand over the G7 presidency to France in 2019. Canadian officials hope that the other G7 countries will follow the Canada-France example and continue trying to reach the targets set out in the Paris agreement, according to the Canadian Press.

The Canadian government is also using this moment to prove that Canada is serious about tackling climate change.

France has voiced concerns around the Comprehensive Economic Trade Agreement (CETA) and its investor-protection clauses that could result in feebler environmental rules, according to the Canadian Press.

A recent article by Patrick Barkham in The Guardian, 22 March 2018, featuring two studies in France, gives evidence of ‘catastrophic’ falls in farmland birds, such as skylarks, whitethroats and yellowhammers, and suggests that the decline could be Europe-wide.

Farmland makes up 45% of EU’s land area.  Dr Benoit Fontaine of France’s National Museum of Natural History, and co-author of one of the studies, outlined the findings of a national survey of France’s common birds. A quarter of the population of skylarks has been lost in 15 years and a third of the total number of farmland bird species. Another study showed that 70% of meadow pipits have disappeared and 80% of partridges. The researchers believe that the declines have intensified over the last 10 years and think that the declines are related to a drastic reduction in insect life – a 76% fall in flying insects on German nature reserves over the last 27 years.  Scientists believe that the falls are related to an increase in the use of neonicotinoid pesticides, to control insects.

Of 39 species commonly found on European farmland, 24 have declined and only six have increased.  The species that have increased are those who also thrive in urban environments, such as chaffinches and blackbirds.

Populations have fared better in non-EU states in eastern Europe, where farming practices are less intensive.  Martin Harper, director of RSPB in the UK said:

“In the UK the situation is just as concerning.  Our beleaguered farmland birds have declined by 56% between 1970 and 2015, along with other wildlife linked to changes in agricultural practices, including the use of pesticides.”

French President, Emmanuel Macron, has pledged to make France a model in the fight against climate change.  This was announced at the Davos talks of the World Economic Forum.  However, France only produces one per cent of its energy from coal-fired power stations, so it is not such a big deal for them.  The full story can be found in The Independent on 24th January 2018:

Emmanuel Macron at the WEF in Davos, Switzerland

Macron’s speech was delivered in both English and French and, according to Quartz, was the longest speech there.  A fuller analysis of what he said there can be found at:

I find it truly challenging that Macron should have the vision to encourage France to lead the way in addressing climate change.  In my book, Three Generations Left: Human Activity and the Destruction of the Planet, I point out that Britain should be the country leading the way, as we were the first country to industrialise – one of the factors that has led to the situation the world is in now, with global warming at alarming levels.

The global scene is an interesting one right now.  The writer of the Independent article cited above points out that President Trump was saying the opposite to Macron for the USA.  Many people across the globe are applauding Macron and others who are speaking out on the issue.  We are at a watershed time.