In this (4th) blog, I am going to provide more data linking heatwaves in the UK with a spike in the number of deaths, especially in the elderly, the young and those with specific health issues – vulnerable groups.

After the 2018 heatwave, The Guardian, published an analysis of this, based on official statistics; it can be seen at: https://www.theguardian.com/society/2018/aug/03/deaths-rose-650-above-average-during-uk-heatwave-with-older-people-most-at-risk

The following includes extracts from The Guardian article:

Nearly 700 more deaths than average were recorded during the 15-day peak of the heatwave in June and July 2018 in England and Wales.

The height of the heatwave was from 25 June to 9 July, according to the Met Office, a run of 15 consecutive days with temperatures above 28C. The deaths registered during the weeks covering this period were 663 higher than the average for the same weeks over the previous five years, a Guardian analysis of data from the Office of National Statistics shows.

ONS analysis for previous years indicate hundreds of additional deaths were associated with brief periods of heatwave conditions in July 2016 and June 2017. The full toll of the 2018 heatwave could reach 1,000, according to one prediction.

“Although the 2018 data is only preliminary, there seems to have been a concerning increase in the number of deaths,” said Dr Isobel Braithwaite, of the public health charity, Medact. “This fits in with current scientific evidence, which clearly shows that long periods of very warm weather can harm people’s health, particularly at extremes of age and in people with other pre-existing health problems.”

“While working in A&E this summer, I saw patients presenting with heatstroke and other conditions that were probably exacerbated by the hot weather, and this obviously places an additional strain on our already struggling health services,” she said.

Dehydration can lead to many issues, from dizziness and falls, to an increased risk of infections, heart attacks and strokes. The 2018 heatwave showed that hospitals and care homes must be made ready to cope with high temperatures.

Another article, published by the London School of Economics and Political Science last year, stated that people are dying of ignorance:

Hundreds are dying from ignorance of rising heatwave risks

The article states that many of these deaths could have been prevented if Government Departments and agencies had listened to the advice of experts and improved the shockingly poor flow of information to the public about the rising risk of heatwaves due to climate change.

There is evidence that many people perish each summer in the UK because they do not understand that the frequency of heatwave conditions are increasing.

The full death toll from summer 2018’s hot weather will not be known for a some time, but is likely to exceed 1000 based on what has happened in previous years.

It is a public health emergency about which nobody is talking. If more than 1000 people were killed in flooding, there would rightly be an outcry, particularly if many of the deaths could have been avoided.

Researchers at the London School of Hygiene and Tropical Medicine identified older people as being particularly vulnerable but also concluded that more people suffer in Greater London, South-East and East England. These are the hottest parts of the UK, and have been experiencing significant amounts of warming over the past few decades.

An assessment in 2014 found statistically significant increases in daily maximum, minimum and mean air temperatures between 1910 and 2011, with “the rate of change increasing from the north and west to the south and east”.

Public Health England published in 2015 an annual heatwave plan (PDF) and jointly operates, with the Met Office, the ‘Heat-Health Watch’ which issues warnings ahead of heatwave conditions occurring. However, the Met Office fails frequently to tell the public that climate change is increasing the risk of heatwaves in the UK.

Another report about the UK heatwave in 2019 had similar findings. It was from the Office for National Statistics (ONS):

The number of deaths spiked on the hottest day of the summer, provisional official data shows.

There were 1,473 deaths on July 25 registered in England and Wales, rising from about 1,100-1,200 deaths per day around the same time, according to figures from the ONS.

July 25 saw temperatures reach 38.7C in Cambridge, breaking the record for the highest temperature ever recorded in the UK.

The ONS was looking at whether “killer heatwave” news headlines are backed up by the data in a release called ‘Do summer heatwaves lead to an increase in deaths?’

The stats body cautioned that the May to August 2019 data is “highly provisional” due to the amount of time it can take for deaths to be registered, meaning the recorded number of deaths per day is likely to increase as more deaths are registered. 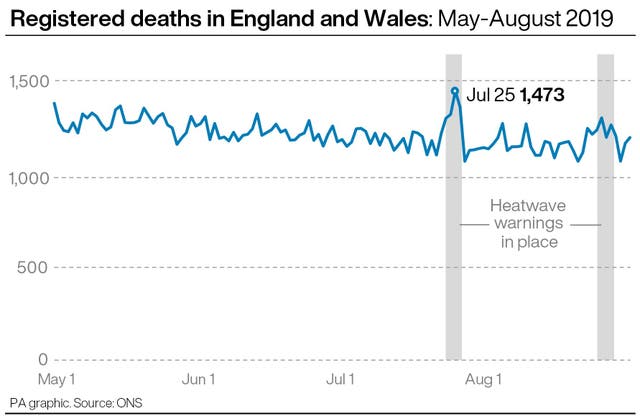 While comparisons with previous years cannot yet be made using the recent summer’s data, the statisticians compared the number of deaths per day in summer 2018 with the five-year average (2013-18).

The ONS said: “The comparatively high number of deaths occur mainly on days that are defined as heatwaves by Public Health England (PHE) in their deaths relating to heatwaves report.”

These spikes tended to be followed by periods of lower-than-average deaths, the ONS said.

“This could be because the most vulnerable people, for example, those with pre-existing respiratory or cerebrovascular diseases are more susceptible to death during heatwaves.”

Even when taking into account the heatwaves, the effects of winter on mortality are consistently greater than summer, the report added.

The executive summary to the document is as follows:

“Heatwaves are predicted to increase in frequency and intensity as a result of climate change. The health impacts of these events can be significant, particularly for vulnerable populations when excess mortality can occur. England experienced several heatwaves in the summer 2016. This report summarises the excess deaths observed throughout the heatwaves of summer 2016.

The Conclusion to the report is as follows:

Conclusions
“England observed 3 heatwave periods in 2016, with significant excess mortality impact in the >65 year olds decreasing in size and geographical extent with each heatwave across the summer. No significant impact was seen in the <65 year olds and the impact on mortality of 908 excess deaths was less than seen in 2006 (2,323 deaths) and 2003 (2,234 deaths). The UK has had a heatwave plan since 2004, the importance of which continues to be highlighted year on year.”

Another Guardian report has reported on a new study, published by the Proceedings of the National Academy of Sciences (USA), in which they conclude that, within 50 years, one billion people will live in insufferable heat due to global warming.  This billion people will either be displaced or forced to endure insufferable heat for every additional 1 degree C rise in the global temperature.

The authors of the study were really shocked by the findings, as they had not expected the human species to be so vulnerable.  The Guardian article and the PNAS reference are as follows:

An article, published on May 17th 2020 in The Conversation discusses the concept of climate sensitivity, which is defined as “the relationship between changes in carbon dioxide in the atmosphere and warming”.

They discuss the use of mathematical climate models to predict the amount of global warming in the future. If climate sensitivity is introduced to these models, there is a surprising and unexpected surge in temperatures in the future.  For example, they predict a rise of 7 degrees C in Australia by 2100, if emissions continue to rise unabated.

These higher temperature changes are not currently presented in the national climate projections, as they didn’t occur under the previous generation of models and emission scenarios.

Higher climate sensitivity means increases to heat extremes. It would mean we’ll see greater flow-on changes to other climate features, such as extreme rainfall, sea level rise, extreme heatwaves and more, reducing our ability to adapt. The two graphs below show temperature changes in the future in both high emission scenarios and a very low emissions scenario. 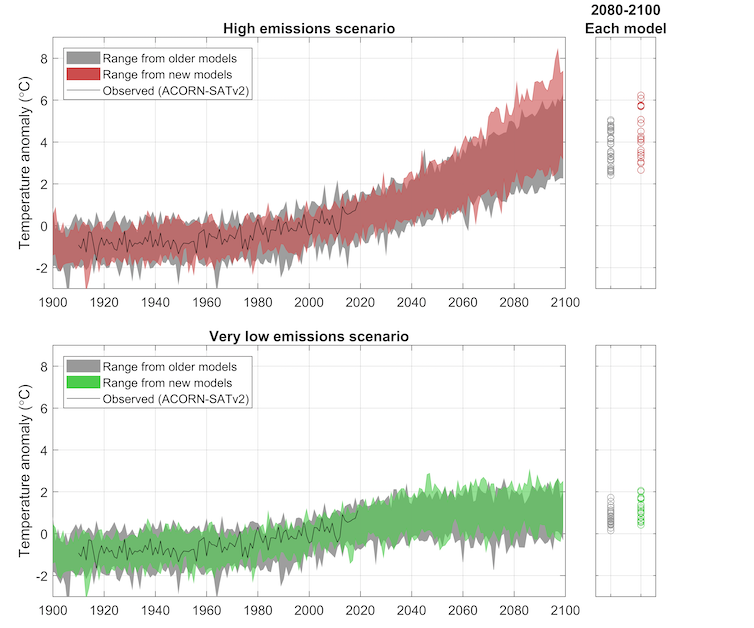 There is also a report in the Washington Post about a heatwave in Siberia (May 2020).

The warmth in Siberia is already having repercussions on Arctic ecosystems, with unusually large Siberian wildfires already burning this year, snow cover plummeting unusually quickly and sea ice cover in areas such as the Kara Sea, which lies to the north of Central Siberia, at a record low for the date, having begun its seasonal melt more than a month earlier than is typical.

In recent years, scientists have raised growing concerns about the stability of Arctic permafrost, including stretches of permanently frozen soil located throughout Siberia. When the permafrost thaws, carbon dioxide and other planet-warming greenhouse gases that had been locked away for centuries is freed up, constituting an accelerant to global warming.

The temperature departures from average in Siberia this year are some of the highest of any area on Earth. Since January, the region has been running at least 3 degrees Celsius above the long-term average, according to a recent report from the National Oceanic and Atmospheric Administration.