This piece is copied with acknowledgments to both the Financial Times, for whom Japanese PM, Shinzo Abe wrote a recent groundbreaking article, and to the editor (BP) of

for giving me permission to use her piece taken from the FT article, to which she added illustrations and emphases:

“In the Financial Times, he writes:

‘The summer of 2018 broke meteorological records, devastating entire regions along the coast of western Japan. There were unprecedented levels of rain, heat, landslides and hurricanes.

The country’s prime minister, Shinzo Abe, has called on all countries to join Japan and act now to save our planet. In the Financie writes:

This summer western Japan was battered by the strongest typhoon to hit the country in 25 years. Unprecedented torrential rain and landslides ravaged the residents of western Japan this summer, killing more than 200 people, and ruining hundreds of thousands of livelihoods.

Roads are cut off by a mudslide at a section of the Kyushu Expressway in Kitakyushu, Fukuoka Prefecture (all pictures and emphases added)

Meanwhile, severe scorching heatwaves struck the country and resulted in approximately 160 deaths. Fierce heat also gripped North America and Europe, and hurricanes and typhoons hit the US and Philippines.

The international community has taken steps to address climate change with forward-looking and long-term goals. An agreement was adopted in Paris in 2015 with the participation of all major economies including China and India. The following year, I went a step further at the Ise-Shima summit in Japan, as G7 members committed to devising long-term strategies.

Climate change can be life-threatening to all generations, be it the elderly or the young and in developed and developing countries alike. 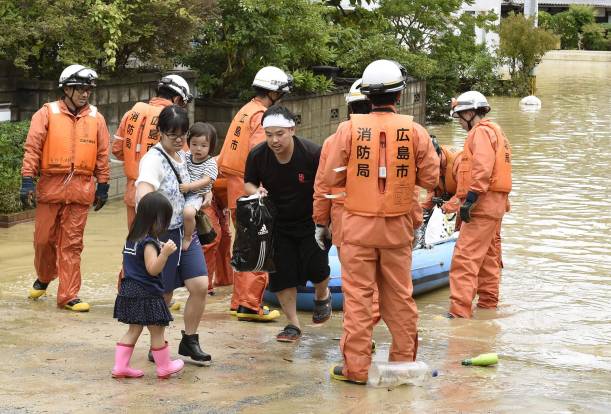 Rescuers help local residents to evacuate in the town of Saka, Hiroshima Prefecture

The problem is exacerbating more quickly than we expected. We must take more robust actions. And swiftly.

The way forward is clear. We must save both the green of the earth and the blue of its oceans.

Our goals must be firmly based on the latest scientific knowledge. As we learn more, through the work and expertise of the scientists at the Intergovernmental Panel on Climate Change, the entire world should take appropriate measures accordingly.

All countries must engage with the same level of urgency. Some are still increasing greenhouse gas emissions and emit more than 2bn tonnes annually according to the International Energy Agency. All countries must put promises into practice. Developed countries should provide support to developing countries for fulfilling their obligations.

As part of their long-term strategies, governments should promote innovation to drive new growth and spread the net widely for new ideas.

No alternatives should be excluded. Japan has goals such as creating ultra-high-capacity storage batteries, further decentralising and digitising automated energy control systems, and evolving into a hydrogen-based energy society. Countries should also rank the competitiveness of a company based on its development and dissemination of future-oriented technologies. This would encourage companies to invest for the long term.

Momentum is already growing in the private sector. The number of companies engaging in environment, social and governance-focused investment or issuing green bonds is rising dramatically. Japan’s Government Pension Investment Fund is one of them. Investors now require businesses to analyse environmental challenges and disclose potential risks as well as opportunities.

We must also focus on reducing emissions from infrastructure.

In Japan, our Shinkansen high-speed rail network prevents congestion and boosts the overall fuel efficiency of transportation nationwide. We also have set our carmakers a goal to cut the greenhouse gas emissions per vehicle they produce by 80 per cent by 2050 so as to realise “Well-to-Wheel Zero Emission”.

We must simultaneously boost economic growth and reduce the use of fossil fuels. That means cutting the costs and improving the reliability of renewable energy. In Japan, the volume of electricity generated from renewable sources has increased 2.5-fold in the past four years. Japan will host the world’s first ministerial meeting focused on hydrogen energy. We cannot overlook safe nuclear power generation and controls on emissions of methane and hydrofluorocarbons.

Finally we should tap data processing and communications advances to speed up the innovation cycle. Investing in energy transition and the sharing economy will ensure economic growth and dramatically reduce greenhouse gases.

Addressing climate change, marine pollution, and disaster risk reduction are critical pillars for achieving the UN’s Sustainable Development Goals. Japan will preside over the G20 next year and focus on accelerating the virtuous cycle of environmental protection and economic growth.

When the seventh Tokyo International Conference on African Development is held in Japan, we will extend support to African countries. We invite the rest of the world to join us in tackling this tough challenge.'”

PLEASE NOTE THAT IN ANOTHER BLOG ON THIS WEBSITE, “20 Countries Most At Risk From Sea Level Rise”, Japan features as having the 3rd highest risk in the world of exposure to sea level rise, with 10% of their population exposed by it.

The Sahara Desert would seem to be a dream location for powering the rest of the world by the use of renewable energy, both wind and solar.

I have thought about this possibility for a long time and it would seem that I am not the only one.  The difficulty with this may be that the Sahara desert is part of a number of African countries.

Logically, to use solar panels and wind farms in the Sahara desert, or any other desert for that matter, would seem to be an ideal solution to reverse global warming and deal with climate change.  It might even help to reduce extreme poverty in Africa.  But, would the large energy companies ever allow it to happen?

So, what has been happening so far?  Morocco has already begun to install solar panels on is territory, with a solar park about the size of Paris.  It is called Noor, which is Arabic for ‘light’.  See:

There is also the Sahara Solar Breeder Project, a joint initiative between the universities of Algeria and Japan.  It is claimed that solar power plants there could supply half the world’s energy requirements by 2050.  It will begin by building a silicon manufacturing plant in the desert to transform silica in the sand into silicon of sufficiently high quality for use in solar panels. Solar power plants will then be constructed using the solar panels, and some of the electricity generated will supply the energy needed to build more silicon plants to produce more solar panels and then more electricity.  A short video explains the process:

The whole idea has been discussed by a number of groups:  See as follows:

One group feels that it would become a target for terrorist activity, especially as there is much political instability in this part of the world:

Many of these posts describe it as a tantalizing dream. But, to me, it is the most obvious option open to the global population.  If it is feasible, then we should find a way.

There is also a claim that wind and solar farms could make it rain regularly in the Sahara desert, through a two-fold increase in rainfall, enabling vegetation to take hold.